Invitations to Apply has significantly increased in 2017 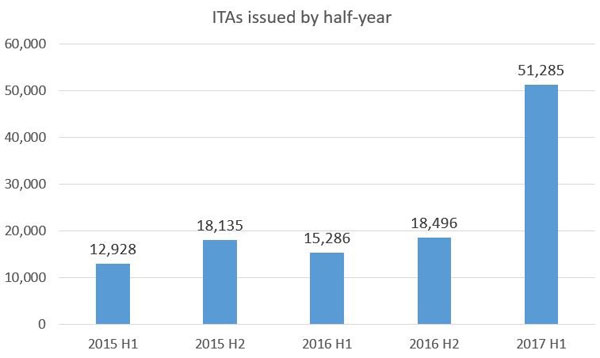 The increase in ITAs issued stems from two clear factors, as noted by senior staff at Immigration, Refugees and Citizenship Canada (IRCC). First, the government set a higher annual target intake for the federal economic programs managed under Express Entry for 2017 than it did last year.

Further, in May a Senior IRCC Policy Analyst stated that only a few cases remained in the backlog of files submitted before Express Entry was introduced in January, 2015. Consequently, IRCC has been able to increase draw sizes in order to meet the annual target intake level, as Express Entry becomes the main driver of economic immigration to Canada.

It is worth noting that the target allocation for the Provincial Nominee Programs (PNPs) for 2017 has also risen, which may also be playing a role in larger draw sizes.

Please refer to this article on cicnews.com