Germany it is the sixth largest country in Europe and it is located in the Central Europe, bordering the Baltic Sea and the North Sea, between the Netherlands and Poland, south of Denmark.
The German economy is both conservative and dynamic. It is conservative in the sense that it draws on the part of the German tradition that envisages some state role in the economy and a cautious attitude toward investment and risk-taking. It is dynamic in the sense that it is directed toward growth–even if that growth may be slow and steady rather than spectacular. It tries to combine the virtues of a market system with the virtues of a social welfare system. 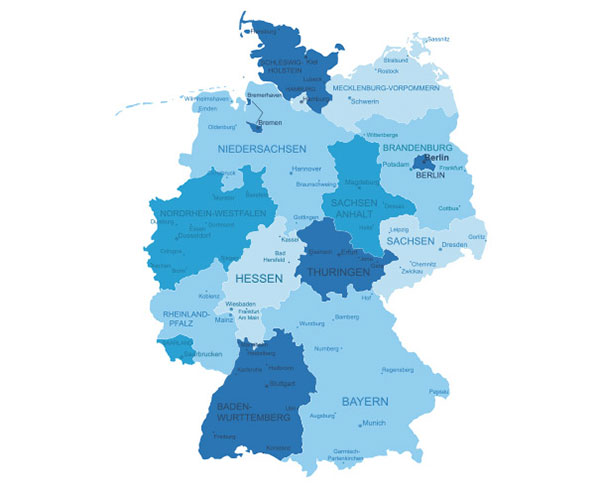 Germany has about 82 million inhabitants. It is by far the largest country in the EU in terms of population. Germany is a modern, cosmopolitan country. Its society is shaped by a plurality of life styles and truly different ethno-cultural diversity. Forms of coexistence have become more varied, and the scope individuals enjoy has become greater. Traditional gender roles have been dispensed with. Despite the social changes, the family remains the most important social reference unit and young people have very close bonds with their parents
Today, Germany boasts one of the most comprehensive welfare systems: 26.7 percent of the country’s gross domestic product is channeled into public welfare spending.

Germany’s climate is moderate and is generally without sustained periods of cold or heat.

Since July 1st, 2013 Germany has opened up its labour market for qualified professionals from countries outside of the European Union under the skilled job seeker visa category.

Germany is Synonymous with Quality. This holds true even in the field of education. Most of the Universities or colleges are state funded. Germany is the land of ideas. Education, Science & Research has been playing a central role in the German society.

German Education guarantees practical knowledge in addition to solid theoretical foundation. Above all it provides a platform to launch a career by making internships compulsory & Bachelor/Master thesis in an industrial environment.

Germany has plenty of fantastic tourist attractions and unique sights to offer. Visitors from all over the world travel to Germany to see architectural treasures and fascinating places of natural beauty. The German National Tourist Board (GNTB) is interested in gathering the most popular attractions and has its international visitors name their German favorites.